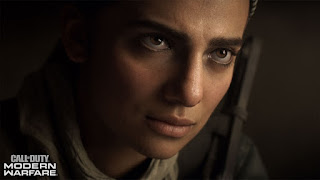 To say that  Call of Duty: Modern Warfare  is provocative is an understatement. It makes you reflect on the horrors of war, violence towards others and the value of life. It also makes you question just how much violence a video game should have. For the 16th instalment of the  Call of Duty  franchise, Activision’s Infinity Ward studio has created a military simulation first-person shooter that conveys what it’s like to fight in foreign and homeland wars in present day, with all of the atrocities and horrors associated with dragging civilians into war. There are a few scenes that are deliberately harrowing. I’m talking chemical warfare, civilian and animal deaths, child combat, torture, and the shooting of unarmed women. You can’t unseen these scenes, and in only one of them is it possible to choose not to participate. It is dark, and there is no shirking from your duties as a soldier—this is what modern warfare looks like. Whether the fighting is at home in the West or abroad in the M
Post a Comment
Read more